Capabilities of SimuLED software have been recently extended to include features specific for the simulation of miniature devices. Now they include the models of several major effects usually associated with the downscaling of LED dimensions towards μ-LEDs: current crowding, increased LED self-heating, carrier losses due to surface recombination, light extraction effects related to miniaturization. At this page, we are giving a brief illustration of these new options. You are welcome to contact us for more details. 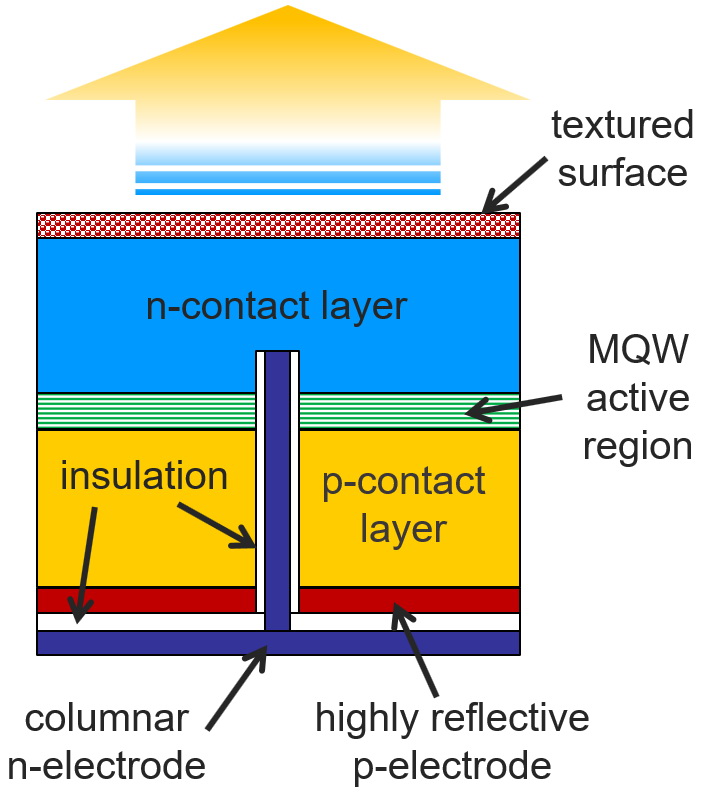 When micro-LEDs operate at high current densities, it makes them vulnerable to losses due to Auger recombination. Unlike their larger analogues,  small characteristic size also increases the impact of the surface recombination at the perimeter of the active region. Thus, successful downscaling of LED dimensions requires accurate consideration of the interplay of several mechanisms affecting the emission efficiency. For instance, carrier losses caused by surface recombination depend not only on the the absolute lateral dimensions of LED chip but also on the current crowding. However, the latter leads to the higher local efficiency droop in the regions of strong current localization. At the same time, the length of ambipolar diffusion in the active region that affects surface recombination and current crowding does itself depend on non-equilibrium carrier density or, in other words, on the current density. Thus, improvement of micro LED efficiency requires coupled optimization of the device structure, chip design, and its operating conditions. 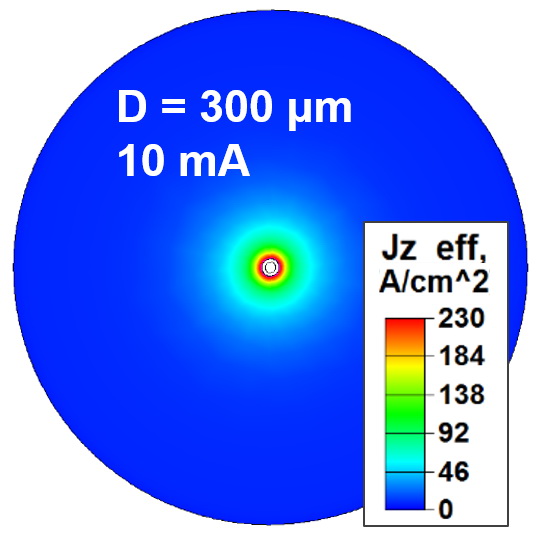 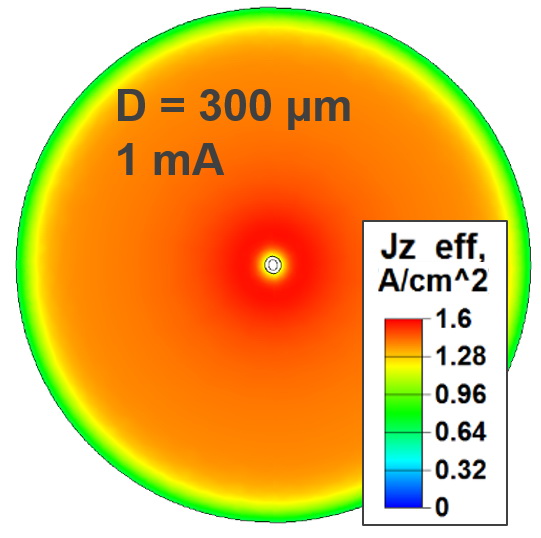 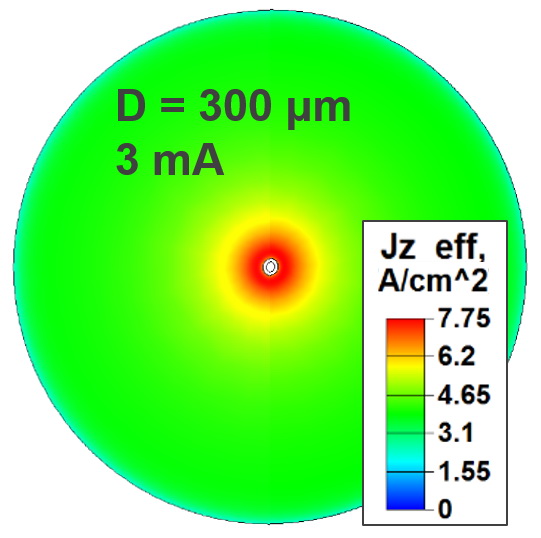 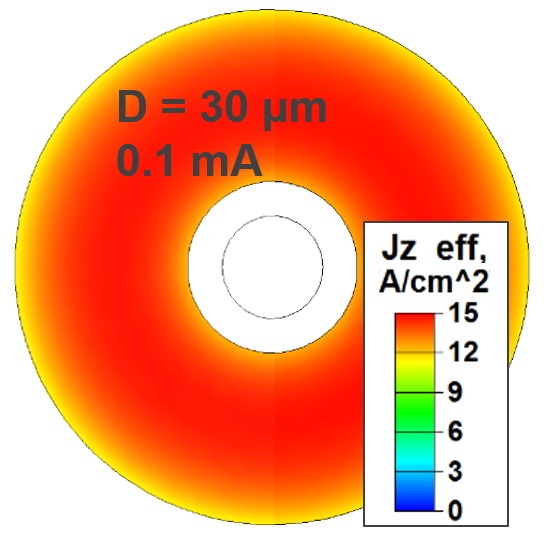 We have considered an LED chip of a circular shape as a simple example, see the image on the right. To conduct a whole chip modeling, first, characteristics of the active region were computed in SiLENSe for a range of local biases and temperatures. These results were used in self-consistent modeling of current spreading, heating, and light extraction in/from an LED die. The recombination current density as a function of radial position illustrates the interplay of the current crowding and surface recombination, right. Detailed summary of numerical simulations can be found in (*). Scaling trends studied in the publication include evolution of current density-voltage characteristics, light extraction and emission efficiency, electrical efficiency and self heating of the device. 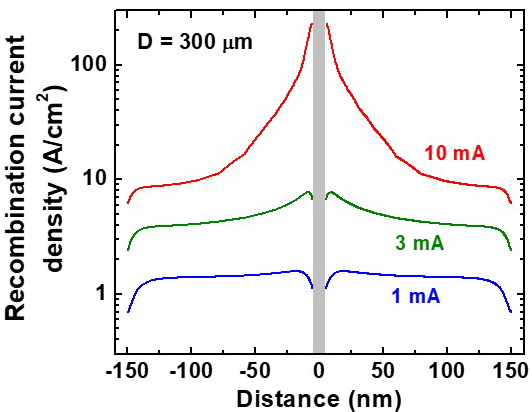 Recombination current density as a function of radial position in a 300 μm chip. 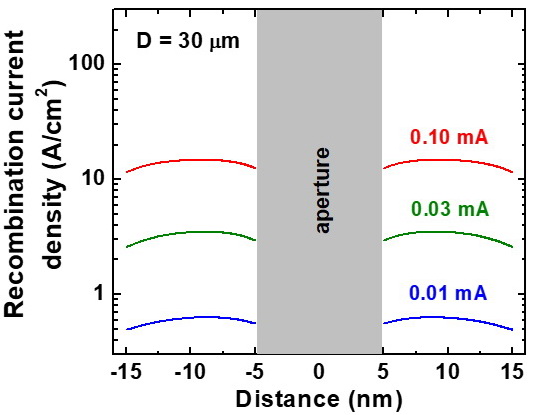 Recombination current density as a function of radial position in a 30 μm chip.

The μ-LED chip we consider next is shaped as a square truncated pyramid. It is shown schematically on the right. One can see insulating layer made of SiO2 separating that the μ-LED die from the highly reflective metal n-contact. This thin layer of  SiO2 can have remarkable effect on the reflection of the light emitted from the active region (see ** for more details).

We have studied the reflection of the photons incident on bulk Ag, which is the common material of n-electrode, covered by SiO2 film. The reflection  coefficients of photons with the wavelength of 453 nm versus their incident angle was calculated for several thicknesses of the SiO2 film. The calculations were carried out for two polarizations of the incident light: transverse-electric (TE) and transverse-magnetic (TM). At small SiO2 thickness (dSiO2 = 50 nm), the reflectivity of TE-polarized light was higher than 90% in the whole range of the angle variation. However, a remarkable dip in the reflectivity of TM-polarized light happens at the angles close to the Brewster angle of silver, see the plot on the right. As emitted photons travel inside the μ-LED and change their incidence angles and polarizations from one reflection to another, this dip results in optical losses caused by incomplete reflection and, eventually in a lower LEE.

When the thickness of the SiO2 film was increased, the magnitude of this dip was reduced considerably at the expense of slight reduction in the reflectivity of TE-polarized light. This transition results in higher LEE of the μ-LED dice with thicker SiO2 layers. However, the increase of the insulator thickness beyond 250 nm does not lead to further LEE improvement. Therefore, SiO2 film thickness of 250 nm can be considered optimal and will be used in the simulations below.

Next, we have considered dependence of LEE to the bottom hemisphere on the shape and size of the micro reflector formed by the inclined mesa facets.

Schematic view of the μ-LED shaped as square truncated pyramid 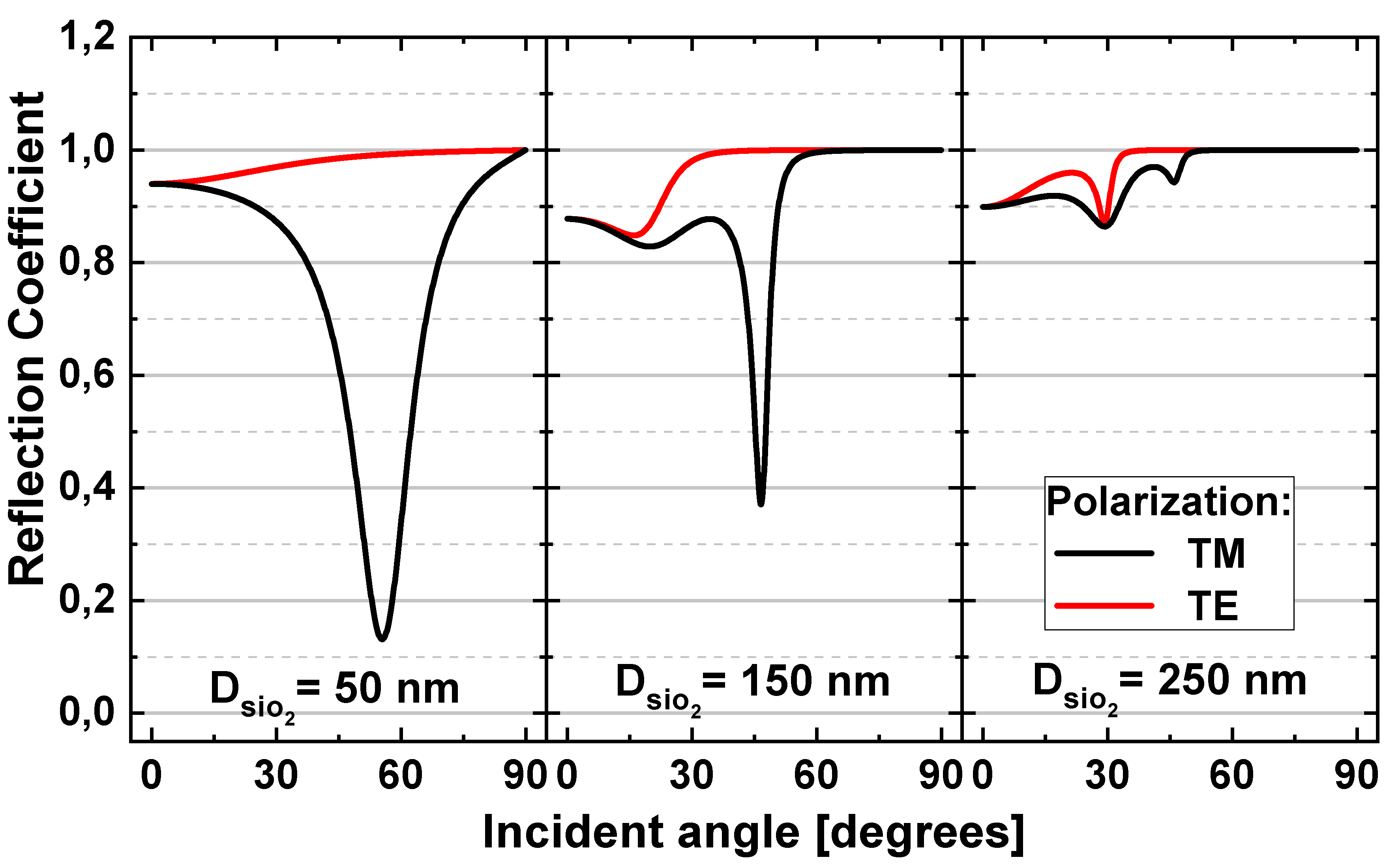 The computation results, including all three plots shown on the right, have two distinct maxima of LEE with a minimum between them. Our interpretation of these results is shown schematically on the far right. While the first maximum corresponds to light leaving the die rather quickly, the second maximum represents the light being extracted after a large number of internal reflections, as strongly inclined mesa facets are largely directs the emitted light in the direction normal to the bottom surface. A minimum of LEE, observed between the angles of 35 and 45 degrees, corresponds to unfavorable facet inclinations producing high optical losses due to light trapping inside the  LED die. See the detailed discussion of different mechanisms of optical losses, their nature and relative contribution, in (**) 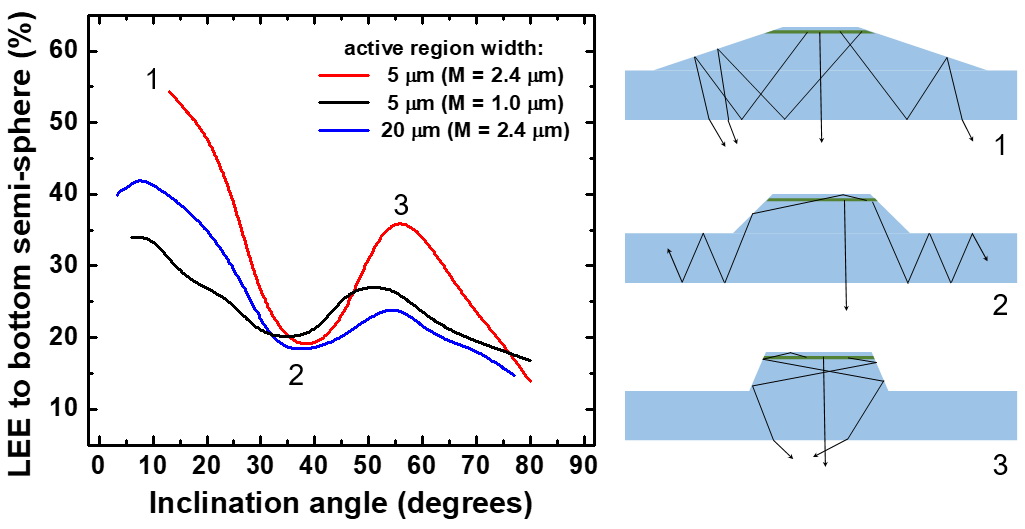 (**) “Effect of Die Shape and Size on Performance of III-Nitride Micro-LEDs: A Modeling Study“ by Kirill A. Bulashevich, Sergey S. Konoplev and Sergey Yu. Karpov, Photonics 2018, 5(4), 41